We got an interesting question on one of our latest episodes on the topic of mining and how the market cap could effect it.

Thinking about mining and the price of bitcoin and decentralization… Do you guys think that an increase in the price of bitcoin, i.e. 1trillion market cap, or more, would have a negative effect on mining? To the point that it would not be worth it for big miners to mine because the resources put into operation do not correlate to greater returns. It tapers off. Kind of like banks with a lot of cash but no ways to put that cash into play.

Interesting question. As I started to answer his question in the “reply” box on-site, the response quickly became too large. So I’m making it a blog post.

TL;DR: In my opinion, such a drastic increase in market cap would only exacerbate current issues.

There are, on average, 144 blocks found per day, which means we have around 230 million USD coming into the market every day, at a trillion USD market cap.

Such an income would only make people with large amounts of money buy machine farms that would be relatively inexpensive compared to the potential earnings, and create large businesses to farm BTC.

Now, this is where the problem gets tricky. I routinely work with large computing clusters for my research, and maintaining them is no easy feat. Other factors come into play at farms this size, and that is infrastructure, e.g. electricity costs, supplying enough energy, cooling, physical space, network bandwidth, maintenance, administration, updating hardware (HUGE), etc. Optimizing these issues becomes what businesses really end up doing, and whoever can minimize the cost of this multivariate problem(not a trivial mathematical problem) is essentially who is most profitable.

The point though, is that because the profitability of a single coin becomes drastically more, the amount of people mining would drastically grow, which means the adaptive difficulty of mining would grow in turn, effectively pushing out the small mining operations to an extent far greater than the current situation. We might see more large-scale operations, or only the current ones grow in size. The former would mean greater relative decentralization, but much more centralization than the vast majority of us picture as ideal.

Now… this is only rough estimates. I’m holding a lot of variables constant, and assuming a lot of things about the free-market value of Bitcoin. But even under this current model, I think as the price of a single bitcoin rises, the centralization of mining gets worse.

Hope I answered his question in some way, shape, or form. I tend to go off on my own tangents when answering other people’s questions. If not, I enjoyed thinking about things, and hope you guys enjoyed reading about it.

Here’s a pdf of my “calculations” I did in Mathematica to think this up. They aren’t difficult, but are provided for transparency sake. Hit me up if you think I’m wrong about something, I’m sure some of you do. 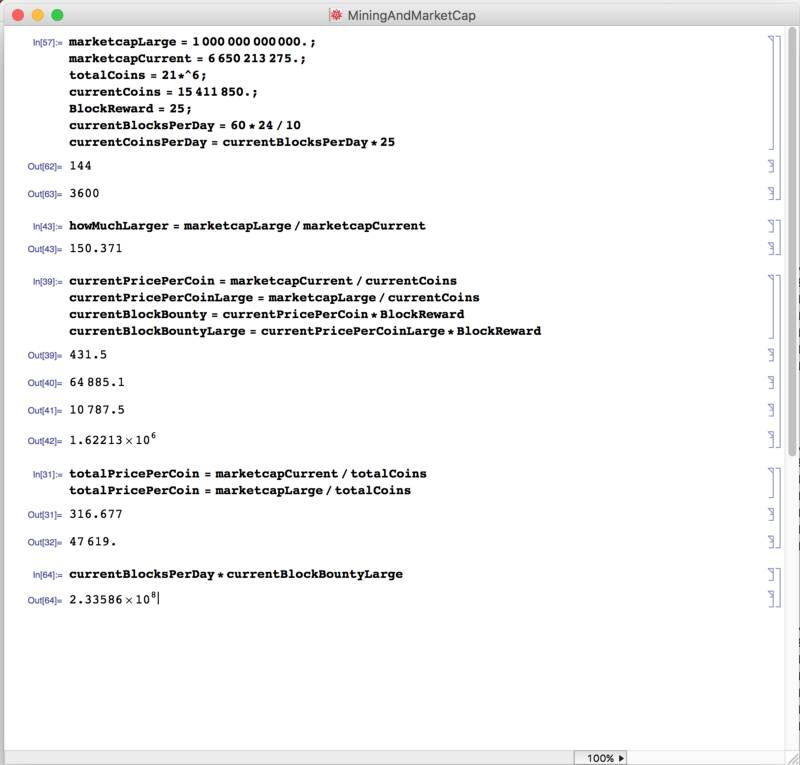